Death is a dramatically spiritual and critically important topic to address, and each of us will become personally acquainted with it at some point in our lives. In the midst of the great confusion, fear, and pain around this topic, Scripture offers us guidance for the inevitable season when we are confronted by the death of one whom we love.

As Christians, we have an immense hope for the future that we are able to hold onto in the midst of loss and death here in the present: the final resurrection from the dead, as Paul discusses in 1 Corinthians 15. Old Testament prophecies will be fulfilled then, as Paul says in verse 55, “Death is swallowed up in victory. O death, where is your victory? O death, where is your sting?” Jesus has conquered death for us by his own death. When he comes again, Christians will mock death as a once-powerful enemy that has been utterly dismantled.

However, in verse 56 Paul also says, “sin is the sting that results in death;” we live in a fallen world and still feel the great pain—the sting—of death. All that we feel in response to death cannot be denied as it is rooted in real loss and separation. The fact that the sting does not exist in the future does not change the fact that it does exist right now.

Even Jesus felt this sting in his life. When his dear friend Lazarus became sick and died in John 11, the God-man’s humanity was on full display in his grief. We see him become deeply angry and troubled, and we see him weep. Jesus was greatly attached to his friend Lazarus, and his death leads Jesus to mourn.

We see here that attachment to loved ones is not unhealthy or sinful. We are supposed to become attached because all people are made in the imago Dei (image of God) and inherently have great value. It is God’s design for us as relational beings to engage and love others; the attachment that will follow when we do so is worth the separation that will be felt at death.

Attachment, loss, separation—these are natural and right according to Scripture. So too is grieving. In 1 Thessalonians 4:13, as Paul talks about the hope of future resurrection, he instructs believers to “not grieve like people who have no hope.” Conversely, believers are to grieve as those who do have hope. The juxtaposition of hope and grief instructs us that hoping and grieving are not at all mutually exclusive disciplines. Hope and grief are godly endeavors for us to engage in as we walk in the light of glory but also in the shadow of groaning.

The graph below illustrates the tension and interaction between these ideas: 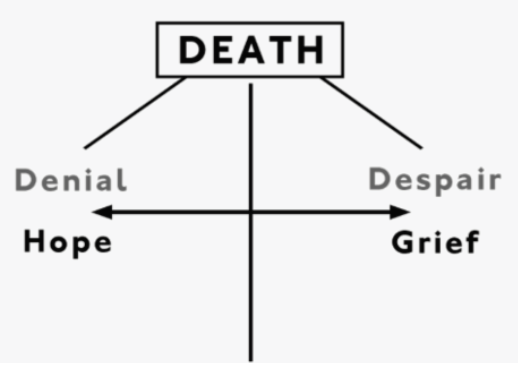 On one side, there is a spiritual denial of death and the reality of the separation that it has brought us. In an attempt to be a mature, powerful, and content Christian, we may deflect the emotions that we feel and circumvent the grieving process with an over-realized sense of hope.

On the other side, there is despair as we realize that what we had is now gone and that we will never regain it. Here there is no hope for the future version of intimacy, companionship, etc. that Christians will one day have with God.

The counterpart to denial is a genuine hope, one that goes beyond the loss that we have suffered. This hope does not erase the loss or make it an illusion but instead informs it. The despair that we could feel then will be tempered into healthy grief—one that acknowledges the reality of both the loss that has happened and the redemption to come in the future.

When death does confront us, these ideas will be helpful as guides to orient us, but we will have to wade through the murky waters of our emotions in reality.

A few things to think about: