Peruse any bookstore today and you will find a multitude of Bible translations amidst the shelves. There’s the ESV, NASB, NLT, HCSB, KJV, NKJV, NIV1984, and the NIV2011, just to name a few. With so many translations available, one could easily be overwhelmed and confused. Because the Scriptures were originally written in Hebrew, Aramaic, and Greek, translation is necessary but why are there so many? Are they really all that different? Is one better than another? And how does one go about choosing a translation to read? These are important and valid questions.

There are several factors that have contributed to the assortment of translations at our fingertips today. The first and possibly most important factor has to do with the original Hebrew, Greek, or Aramaic manuscripts from which translators are working. These manuscripts are the painstaking work of scribes who copied the Scriptures throughout the years in order to preserve God’s word for the generations. Some of these manuscripts date back thousands of years. Amazingly, in the case of some of Paul’s letters, there is only around 150 years separating the manuscripts from his original letters. The English translations we have today have been based off of these manuscripts. The better and more accurate the manuscript, the better the base from which to translate.

A second key factor at play is the receptor language, or language into which the Bible is being translated. As scholars labor to translate these manuscripts, they must consider how to convey the original language with all of it’s cultural words, expressions, and meanings into a different language that often does not have the same words, expressions, or meanings. The challenge for scholars is to do this in a way that does not distort the original text but at the same time translates it in a way that is clear, understandable, and relevant to the reader. In a recent article on translation, scholar N.T. Wright stated, “translation is bound to distort. But not to translate, and not to upgrade English translations quite frequently, is to collude with a different and perhaps worse kind of distortion. Yesterday’s words may sound fine, but they may not say any longer what they used to say.”

Wright’s quote obviously raises the question of the possibility for errors or distortion in our Bibles. Scholars today have more resources available than they did many years ago, which makes better, truer translations possible. Nevertheless, the fact remains that no translation is infallible. Errors in translation are inevitable. That does not, however, negate the fact that Scripture, in its original form, is without error. Translation committees spend years studying, discussing, praying, and laboring over Scripture in efforts to render the most accurate, readable translation possible. Though our translations today may have errors, readers can be confident that these errors are minor in nature, not doctrinal.

All translation committees have one common desire–to translate an accurate, understandable, readable version of Scripture from the original manuscripts. Where they differ is in what they deem their most important goal. Is the goal to be more true to each individual word or is it to convey the overall thought? Or are they more concerned with cultural relevancy and ease of understanding? This is where translations begin to diverge.

Most translations fall into one of three categories, which are based upon how they were translated. First, there is a formal, or word‐for‐word, translation. Scholars who attempt to remain as close to the original form of the Hebrew and Greek in both words and grammar have translated Bibles that fall into this category, such as the KJV, ESV and NASB. The goal of a formal translation is to capture how the original authors spoke, by focusing on translating each word, in ordinary English without distorting the meaning of the original text. This is only loosely word for word. It is impossible to take the words of the original Biblical text and translate it in a word‐for‐ word manner due to the fact that one original word may require two to three words in translation.

Secondly, is a functional, or thought‐for‐thought translation. A functional translation attempts to keep the meaning of the original text while putting it into words and expressions that are more normal to the language into which they are translating. In essence, Why So Many Translations? grace church position papers the translators are more focused on what the author intended to communicate versus the exact word choice. The NLT and NIV are found within this category.

Finally, there is the free, or paraphrase, translation which attempts to translate ideas from one language to another but does not focus as much on using the exact words of the original. This category includes The Message and the Living Bible. Reference the chart below (courtesy of www.zondervan.com) to see into which category the various translations fall.

There are many who believe that the King James Version is the only acceptable version of Scripture. The King James Version was originally written in 1611, after King James commissioned a group of scholars to produce a new translation. Upon it’s production, King James declared the KJV to be the sole Bible to be used in public worship services in the Church of England. Many today, believe that it is the only holy Bible, which is in essence stating that the only true Scripture has been written in English, which is an arrogant claim.

Though at its time, it may have been a better translation than what was available, we now know there are a few problems with the King James translation. First, it was translated from inferior original manuscripts. Since the KJV was written, discoveries of three new manuscripts (the Codex Sinaiticus in 1844, the NT papyri in 1895, and the Dead Sea Scrolls in 1947) have given scholars the ability to produce more accurate translations. Secondly, the fact that it is almost too literal in its translation and the language used is unnatural in current day English makes it difficult and awkward for readers. N.T. Wright, in the aforementioned article reminds us that while much can get lost in translation “things get lost just as effectively when, instead of translating, we stick with a foreign or ancient language which readers or hearers do not understand.” This could easily be said of the King James Version. Though, the NKJV addressed this issue by eliminating the wooden language of the KJV, scholars behind this translation still used the inferior original manuscripts as its base for translation. (See chart courtesy of www.crossway.org) 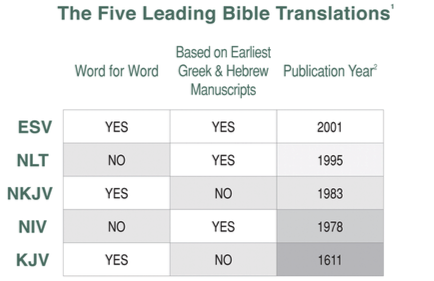 So, with all that being said, how does one choose a good translation? Grace Church uses the NLT due to its accessibility for teaching large groups of people and because it gives a very modern, readable version of the Greek and Hebrew without losing much of the literal understanding and flow of the passage. However, there is much to be gained by reading and studying various translations. The NLT or the NIV is a good choice for regular reading and when reading large quantities of Scripture. For deeper study, we recommend an ESV or NASB translation. Biblegateway.com is a great tool that allows a student of Scripture to read from up to five different translations at once.

For further reading on this topic, check out How To Read The Bible For All Its Worth, by Gordon Fee and Douglas Stuart.

“When people ask me which version of the Bible they should use, I have for many years told them that I don’t much mind as long as they always have at least two open on the desk.” N.T. Wright