"Just because you have a relationship with Christ doesn't mean your life is going to be great. Coming to the Lord doesn't mean you're going to get the big house you want, the children you want. . . . Loving the Lord, seeking him, seeking his face is the hardest thing you will ever do—but the reward is so great, I would rather be right where we are because of how close it has brought me to the Lord."

On Monday, October 12, 2020, Autumn Piedrahita was heading home after work. It had been a long day, and, exhausted, she decided to take an alternate route to the apartment in Taylors where she and her husband Shawn lived. But as she turned at the intersection leading to their complex, her car was hit by a semi-truck driving at 55 miles per hour.

At the time, Autumn and Shawn had been married only ten months and were attending the Spartanburg campus, where Shawn was working as a resident. Shawn was leaving a Forge meeting when he noticed a missed call from Greenville Memorial, informing him his wife had been in an accident.

At the hospital as the doctors and nurses worked to assess her injuries, Autumn remembers feeling a surreal calm in the midst of the chaos. “You don’t know what you’re going to do in a crisis until it actually happens. I thought I would completely turn from God, but I remember openly praying to God asking him to comfort me,” she says. “I kept asking people to pray for me, strangers I didn’t know to pray, ‘Lord be with her.’ I knew there was a purpose. I knew no matter what, the Lord doesn’t waste. He was saying to me, ‘Hey I’m here, I’m doing something. I just need you to trust me.’”

Once Shawn arrived at the hospital, doctors told him that Autumn had broken her pelvis and sacrum in multiple places and had a bad concussion. As he listened to his wife cry out in pain, a wave of emotions overwhelmed him.

“I remember doubling over trying to hold back tears and anger, asking God, ‘Why in the world is this happening? You said you cared for us. You’re supposed to be our loving Father, why is she laying there? How in the world can this truck driver be going about his day, still working, and my wife is laying there not being able to walk, not knowing if she’s going to be able to walk again,’” Shawn says. “And Autumn’s the one saying, ‘This happened for a purpose, this happened for a reason.’ I just couldn’t see it.”

After five days, Autumn returned home, facing a long recovery journey with multiple types of therapy. Daily tasks, the motions we do on autopilot, Autumn now had to relearn. Walking, taking a shower, moving her arms, brushing her teeth—all became monumental struggles that required dependence on others to help her.

“I realized that I have a deep-rooted struggle with control and autonomy. When you struggle with those things and you have everything stripped away from you all at once, it’s very traumatic,” Autumn says. “It was very difficult, very painful, and very scary. I had lots of long conversations with the Lord about what was happening. Being fully dependent on another human being is very sobering, and I had to trust that God would give Shawn the strength to do what needed to be done.”

For Shawn, Autumn’s pain, the sudden responsibility of being a full-time caregiver, and the looming medical bills he knew they couldn’t pay, caused anger and frustration, and revealed a need to rest and depend on the care of his community.

“Chaos will make you realize how selfish you are,” Shawn says. “Autumn couldn’t do anything for herself, I had to carry that burden for her. And it’s a lot to carry, no matter if you’re married for decades or for ten months. I still had moments of anger and frustration. But looking back, I can see what the Lord has done and how he’s cared for us.”

When the Piedrahitas remember the countless ways God specifically provided for them, it moves them to worship. One day, they received several large medical bills in the mail, which they had no way to pay for. In tears, they immediately approached God in prayer, choosing to worship him together in the midst of their fear. As soon as they said, “Amen,” they heard a knock at their front door. When Shawn opened it, he found an envelope full of cash on the doorstep. With tear-stained faces, they placed the envelope on the bed and praised God.

“Things like that happened over 40 times, easy. When we would be desperate, struggling with our humanity to trust, we would come to him with nothing in prayer, and the prayer would be answered in some way,” Autumn says. “He would give us what we needed and we were able to pay off those bills with the surprise money that showed up right after prayer.”

Whether it was as simple as a meaningful song during worship or new, trustworthy friends to take Autumn to appointments, God was showing Shawn that he truly was his loving Father, and revealing to Autumn that he was powerful enough to handle her moment-by-moment needs. When they needed a new place to live away from where the accident occurred to prevent painful triggering for Autumn, God provided. As her PTSD became more crippling, God provided a counselor specializing in eye-movement desensitization and reprocessing therapy (EMDR) to help Autumn process through her trauma.

“I had been treating God like we were equals, like we were working together to run the earth, Autumn says. “And the Lord shattered that for me on that fateful night. I had the sobering realization that we are not coworkers, God is God. I am alive because he allows me to be. He wanted me here, otherwise I wouldn’t be. I can do nothing aside from him. I have no abilities beyond what he allows. Now I have this new found respect for him from this beautiful perspective he has given me through the experience he let me walk through while he held my hand.”

“God is a loving Father who gives good gifts to his children,” Shawn adds. “In the midst of chaos it’s hard to believe that when you’re hit with the hospital bills. Everything in the world is his and because he has adopted us into his family through faith in Jesus, we have access to him. There’s an unlimited resource there, not to say that he’s going to give it to us in our timing, which he didn’t. That was really hard for me a lot of nights when Autumn was unable to get comfortable because of the pain. I felt like I was literally the most ill-equipped person to be with her. But God’s holding her in his hands and loves her as a daughter. And that’s better than me as a husband who loves her.”

Although it’s been over a year and half since the accident, the Piedrahitas are still in recovery, something they believe could last forever. Autumn’s doctor’s appointments are now only monthly, and she looks forward to graduating from physical therapy soon. She is still unable to drive, and may have lasting nerve damage in her legs. But the two are ever clear that who God is—his love, goodness, and power—is not dependent on their present circumstances.

“Just because you have a relationship with Christ doesn’t mean your life is going to be great. It doesn’t mean you’re going to get that big house you want or the children you want or the financial security you want,” Autumn says. “Loving the Lord and seeking him, seeking his face is the hardest thing that you will ever do. That is harder than this. Breaking my pelvis and not being able to walk is super easy in comparison to chasing after the Lord. But the reward is so great. I would rather be right where we are right now than anywhere else because of how close it has brought me to the Lord, and I want people to know that.” 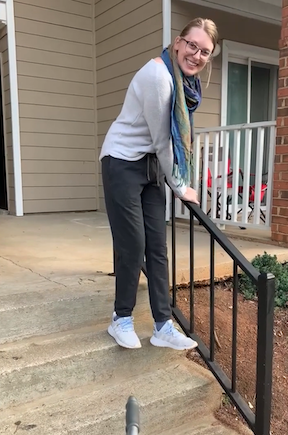 “Choosing Christ is the greatest decision you will ever make, even though it will break you into a million pieces,” she adds. “But he’ll pick you up off the floor and rebuild you the way he wants you to be.”