What does it look like to trust the Lord in this life when he might allow us to endure really painful things? 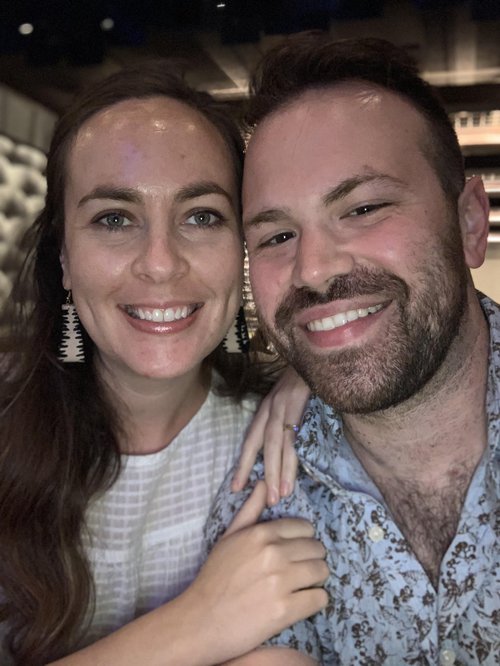 When Adam and Kelsey met at their first community group in Spartanburg in 2014, they had no idea how their futures would be intertwined and what trials they would face. Their relationship began like many do, as friendship. However, as they grew closer and their friendship became more intimate, things got complicated. Kelsey realized that it wasn’t healthy for them to be so close unless they were dating, and Adam was not ready to make that commitment, so they created some space from one another. This time apart proved to be pivotal in both of their lives. Both of them got involved in serving, sought intentional discipleship, and got baptized. And as they grew in spiritual maturity, God made it clear to Adam that it was time to pursue a relationship with Kelsey. God had been faithful to work in both of their hearts to prepare them, and in August of 2020, they got married.

Just four months after they got married, Adam and Kelsey encountered what would be a significant challenge for their faith. Kelsey has two autoimmune diseases that affect her bone marrow, and while she had been in remission for some time, she began to experience symptoms again. Because these diseases affect her ability to produce blood, she is dependent on blood transfusions when her symptoms flare up. These transfusions are time consuming as well as physically and emotionally exhausting. It was a very discouraging time for both Adam and Kelsey, particularly in the midst of Covid. They had to be careful about exposure since Kelsey was immuno-suppressed, which made them isolated during this already stressful time.

For seven months, Kelsey underwent testing and a series of unsuccessful treatments. This was not a new experience since she has been living with these diseases for 15 years; however, this was the first time her body had not responded to treatments. It was frightening for both her and Adam as there didn’t seem to be any hope in sight. Finally, the doctors landed on a treatment that was helpful. However, Adam and Kelsey continue to live in the unstable and unpredictable world of chronic illness.

As they navigated these difficult months, question after question poured out of their hearts, and there seemed to be no answer.

We know God allows us to go through trials, but how do we pray? Do we pray for healing? If God is simply going to do what he is going to do, then why do we pray at all? Is this simply our burden to bear?

These are complicated questions to which there is no clear answer. But the very fact that Adam and Kelsey were willing to grapple with these questions and bring them to God even when he seemed distant shows how he was at work in their lives. It was work to process what their relationship with God looked like during this time, and they both uncovered a lot of anger. Adam was frustrated that he could not “fix” the situation or make things better for his wife. He had never experienced anything like this before, and he felt completely destabilized and helpless. Kelsey dealt with big questions around why God was allowing this trial in her life:

It felt like the Lord was allowing us to suffer. I still believe that in his character, God will bring beauty from ashes and that all of our stories will reflect the great story of his redemption. But in that moment, I didn’t know how to call God good. I grieved that I could not see his goodness in my suffering. You can cry out to the Lord and beg him to take something from you, but he just might not.

Community was vital for Adam and Kelsey during this time. However, because of the nature of Kelsey’s illness and the presence of the pandemic, community had to look different for them. In spite of that, they both realized how important it was for others to enter their suffering and be with them through this season. Kelsey in particular felt a deep need to connect with someone who had endured a similar experience, someone who could tell her that God had her even when she couldn’t feel or see him—that there was hope on the other side of her grief. And God in his faithfulness provided those people for both of them:

I’m thankful for how wide and deep the church is. We’ve been able to connect with others who have endured suffering, and their roots of faith are deep. They are not discouraged or shaken by our big questions. God has provided people to witness our suffering and stand with us.

Another aspect of community that helped Adam and Kelsey process their experience was re:generation. When their community group wrapped, they realized that even though they didn’t struggle with addiction or any of the issues many people associate with re:gen, they needed a place where they could be raw and authentic with other people. They definitely found that safe place in re:gen. Adam explains how it helped him learn what it means to be vulnerable:

I grew up in a very non-confrontational, non-emotional home. We all just put on a face. And to be in a room full of men baring their souls and being vulnerable–I never had that example before. In re:gen, vulnerability is the norm and it’s expected of you.

For Kelsey, the format of re:gen provided a place where she could ask hard questions without fear of judgment or being dismissed:

Adam and Kelsey’s story is far from over, and there are still many unanswered questions. While Kelsey’s health has stabilized, she has no promise of an easy future. In the midst of all this instability, they cling to the truth that God does not change. His character is one of steadfast love and faithfulness to his children. And even when our lives are chaotic and full of suffering, God is still there, and he is still God.